Chad Rozanski joined the Army not long after graduating from high school, wanting to give back and seeking change. He enlisted as a fire support specialist with the 2nd Brigade Combat Team, 1st Armored Division. Chad loved the brotherhood and camaraderie he developed while serving with his brothers in arms.

In 2005, Sergeant Rozanski went on his first tour to Iraq with the 1st Battalion, 35th Armor Regiment. During that deployment, on July, 2, 2006, Sergeant Rozanski’s vehicle ran over an improvised explosive device (IED) in Ramadi, Iraq. The blast caused the vehicle to rollover, pinning SGT Rozanski underneath the burning wreckage. It took SGT Rozanski’s team members almost an hour to free him from the vehicle by digging with shovels and using a jack.

Once transferred back to the United States, Chad began what he describes as a long and painful recovery at Brooke Army Medical Center. He underwent countless surgeries, with doctors amputating both of his legs above the knee. He also sustained burns to almost 40 percent of his body, which required skin grafts. Despite all he’s been through, Chad still considers himself a lucky man.

Now medically retired, Chad’s two children are his whole world. He enjoys supporting his son Logan’s baseball team, and loves watching the players learn the game and work together. His previous living environment prevented Chad from spending time with his children. Since Chad’s home was not wheelchair accessible, keeping up with his daughter, Lydia, was exhausting. When he was active and busy, he tended to push his physical limits, requiring him to spend days recovering. Because of this, Chad would often turn down social opportunities. He says his specially adapted custom Homes For Our Troops home changed his mindset. “Being in a home where I don’t have daily limitations, I am almost able to forget how injured I am. There was always something that was out of reach or impossible for me to do in every other home I have lived in after my injury.”

The financial freedom of a donated home gives Chad the foundation to pursue school and a career. He plans to go to school for gunsmithing or sustainable agriculture.

Originally from Arkansas, Chad chose to build his home in Florida.

Chad wants HFOT’s donors and sponsors to know they are truly making a difference in the lives of injured Veterans. “There are a lot of people out there who will talk about it, but never do anything. Thank you very much for stepping up to the plate and making something good happen. This would never had happen without your support.” 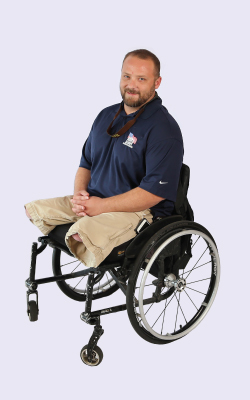