Marine Corporal Jacob Romo was on his first deployment when he sustained the traumatic amputations of both of his legs and right hand injuries in an improvised explosive device (IED) blast in Sangin Valley, Afghanistan on Feb.11, 2011.

While on a dismounted patrol in the middle of farm country in the Helmand Province in Afghanistan, Cpl Romo stepped on a buried IED.

Conscious throughout the ordeal, Jacob knew immediately that both of his legs were gone. Lifesaving measures by his comrades helped to stabilize him for a medical evacuation by helicopter.  Airlifted to Camp Bastion, Cpl Romo was treated for his injuries before being flown to Landstuhl, Germany where he remained for a week.

Now medically retired, Jacob enjoys spending time with his wife Michelle and their four children. Members of Whitten Memorial Baptist Church, Jacob is head of security, leader of the children’s ministry along with his wife Michelle, and is in a two-year program training to become a minister. An advocate and mentor for Veterans, he is involved in assisting Veterans transition to civilian life, including mentorship. Jacob runs White Rabbit Protection Strategies, a think tank and training group for the mechanical and sociological study of human violence, and is associated with System of Strategy (a modern study of Martial Arts, history, and strategic theory).

Cpl Romo would like to thank all of the donors and volunteers who support Homes For Our Troops. “We are so grateful for this opportunity. I am a big believer in self-empowerment and investing in people. This home gives us the means to pay it forward to other Servicemembers as well as those in our community. We will be able to more effectively help more people in the future. Thank you,” he says. 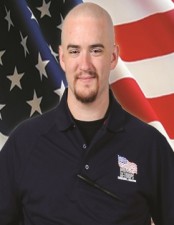