Max Rohn always knew he wanted to join the military. He saw it as an opportunity to travel and wanted to follow the legacy of his grandfather who served during World War II. Being a lifeguard during high school, Max excelled at administering first aid, and decided to enlist as a corpsman in the Navy.

On May 2, 2009, during his first combat deployment, Hospital Corpsman 3rd Class Rohn was serving with the 2nd Marine Headquarters Group in Fallujah, Iraq, when his vehicle was struck by an RKG-3 grenade. HM3 Rohn sustained severe damage to both his legs in the blast. After two years of limb salvage, Max made the decision to have doctors amputate his right leg.

In the years since his injury, Max has accomplished many things. He received his bachelor’s degree in international politics from Penn State University, and spent time in California training in track and field at the Olympic Training Center. There, he met the love of his life, his fiancée Victoria. Most of his hobbies and activities center around his love of adapted sports. He competes for Team USA in track and field in men’s discus; he recently started snowboarding and plans to try out for the Winter Paralympic team in 2026; and he’s a War Fighter Sports ambassador for Move United.

Though he has made a name for himself as an adapted athlete, Max still experiences obstacles in his current home because it is not wheelchair accessible. He often becomes discouraged when he encounters challenges during his daily routine, and has injured himself when hopping out of the shower on his crutches. These issues will be alleviated once Max receives his specially adapted custom Homes For Our Troops home, giving him more energy to concentrate on adapted athletics knowing he can recover safely at home.

After 15 years of moving around, Max says he’s ready to move back to Colorado where he grew up. Receiving an HFOT home will enable Max to have a stable roof over his head and start a life together with Victoria.

Max wants HFOT’s donors and supporters to know their generosity is life-changing for him. “During my darkest times in the hospital, I could never let myself focus on my future while fighting for my life in the present. Now that I have the possibility of receiving a home, or better yet a future, I’m extremely grateful. I plan to spend the rest of my life dedicated to my family, friends, and community. Thank you, to the moon and back.” 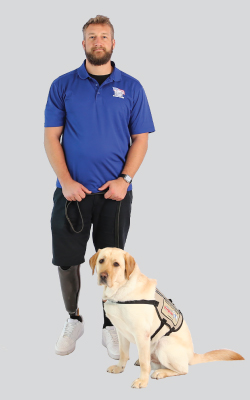