In April 2006, Army Master Sergeant Daniel Robles was on his third deployment when he lost both of his legs in an improvised explosive device (IED) attack near Baghdad, Iraq. As the Mortar Platoon Sergeant, MSG Robles was leading a mission to investigate a possible weapons cache site when his vehicle was hit by the IED.

Seeing the devastation to his legs and feet, he knew he had been seriously injured. Trapped in the vehicle, and not wanting to go into shock, he refocused his thoughts and began shouting orders to his men telling them to “pull security” and secure the location. Amid all of the commotion the vehicle caught fire…luckily, it was extinguished before jeopardizing the lives of those still trapped inside. Communicating over hand-held radio, MSG Robles called for a medic and assisted as his Soldiers, one of them injured and unable to open his eyes, applied tourniquets to both of his legs.

Transported by helicopter to the local Combat Support Hospital, MSG Robles remembers thanking the pilot before falling unconscious for two days and waking up in Landstuhl, Germany. He was later transported to Walter Reed Army Medical Center, and eventually Brooke Army Medical Center, where he spent two months in the hospital, recovering from his injuries and beginning his physical therapies.

MSG Robles is grateful for the support he and his family have received from their community. Daniel enjoys outdoor activities such as hunting, fishing, and camping. He also plays defense for the San Antonio Rampage Sled Hockey Team. Daniel is pursuing a bachelor’s degree in computer information systems and enjoys spending as much time as he can with his wife, Ernestine, and their daughter, Mary.

When asked if there was anything he would like to say to those who made his specially adapted custom home possible MSG Robles stated, “Words cannot describe how good it feels to know that there are organizations and people who really care…they continue to do so much for injured Soldiers and Servicemembers. Having a specially adapted home built by Homes For Our Troops helps me feel safer in my surroundings. I have peace of mind knowing that as I get older, I am not going to have to worry about being able to get around in my own home. Thank you so much.” 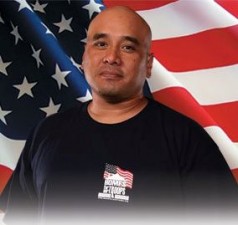