In May 2007, Army Sergeant Marco Robledo was on his first deployment when he lost his left leg and left arm after an improvised explosive device (IED) explosion in Taji, Iraq.

In the third of a five-vehicle route clearing patrol, SGT Robledo was the gunner in the turret when the vehicle rolled over a pressure plate improvised explosive device (IED), the explosion tearing through the vehicle. After losing consciousness and waking to the smell of something burning, SGT Robledo could not move, not realizing that he had lost his left leg above the knee and his left arm above the elbow as a result of the blast.

Caught in an ambush, and with gunfire coming from all directions, he was quickly transported to a local hospital in Baghdad. Marco was soon flown to Balad before being airlifted to Landstuhl, Germany, then to Andrews Air Force Base, and finally to Walter Reed Army Medical Center where he was treated for more than three years after the attack.

Marco grew up left-handed and has learned to use his right hand to write. He enjoys drawing, working on cars, Scuba diving, running, swimming and listening to music. He devotes much of his time to helping others. Marco is pursuing a degree in psychology from the University of Maryland University College.

SGT Robledo is honored to be a part of our nation’s military. He says, “I always wanted to travel and see different places. After deploying and being hurt, however, I realized that there is no place like home. Thanks to Homes For Our Troops I now have that.” 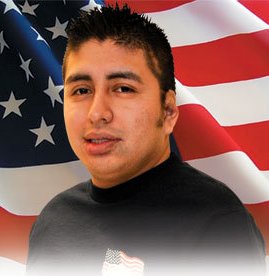