Javier Rivera Rivera attended college for six months before deciding to enlist as an airborne communications specialists in the Army.

On Nov. 12, 2007, while on his second deployment, Army Sergeant Rivera Rivera was serving with the 1-91 Cavalry, 173rd Airborne Brigade in Paktika Province, Afghanistan when his vehicle was struck by an improvised explosive device (IED). SGT Rivera lost his right hand and sustained burns to over 40 percent of his body as a result of the blast.

Now medically retired, Javier says his rehabilitation process has been never-ending. Initially, he received treatment at Brooke Army Medical Center in San Antonio and later underwent reconstructive surgery at UCLA. Javier is grateful to the support of his mother, who gave up everything to be at her son’s side during the first three years of his recovery.

Javier met his wife Ana shortly after his injury. He says Ana has been “his rock” and helped steer him in the right direction during his recovery. The couple has two children, Abdiel and Ana. In his free time he enjoys anything involving cars – especially racing.

Javier says receiving a specially adapted custom home “means the world” to him. The hardwood floors make it easier for him to sweep with his only hand. Tinted windows, central air, and a covered patio are comforting in the Texas heat as he continues to recover from his burns. Additionally, living mortgage-free gives him the opportunity to put his energy into school, enabling him the opportunity to provide a better future for his family. He is currently studying applied science with an emphasis in business management at Wayland Baptist University.

Originally from Puerto Rico, Javier chose to build his home in San Antonio to be near the hospital and because he finds the area to be peaceful.

Javier wants HFOT’s donors and supporters to know he is grateful for their support. “HFOT is a wonderful organization, it’s great to see all the people that care about us,” he says. 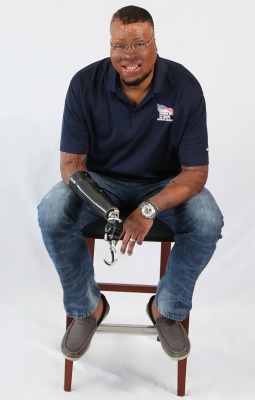