Carlos Rivera-Medina joined the Army in 1992, a few years after graduating high school, with a desire to serve his country and pursue a career in Aviation. He went on his first deployment to Kuwait in 2001 and deployed again to Iraq in 2003.

On June 3, 2003, Staff Sergeant Rivera-Medina was injured during operations while serving as the Non-Commissioned Officer in Charge (NCOIC) of Company A, 1st Battalion, 160th Special Operations Aviation Regiment in Iraq.

Following the injuries, SSG Rivera-Medina experienced pain and discomfort in his right leg and back. As his condition progressed, he began having difficulty walking and having seizures. He was later diagnosed with a severe incomplete spinal cord injury. While still on active duty, SSG Medina elected to have spinal cord surgery, a decision which forced him to part ways with the Army, the career he loved so much.

Carlos is now paralyzed and uses his wheelchair, but his current home presents many challenges. Carlos is often discouraged when he cannot do routine tasks independently, like reaching the cabinets to make a sandwich and accessing the bathroom to brush his teeth or take a shower, because most rooms are not wheelchair accessible. He often becomes frustrated having to rely on his wife and their daughters for help around the home.

Carlos says receiving a specially adapted custom Homes For Our Troops home will be a dream come true. Regaining his freedom and independence will give Carlos the motivation to support others. He would like to be an advocate for other injured Veterans by fighting for fair laws and policies. Carlos will also have more time and energy for his favorite activities, including adapted skiing/snowboarding, shooting, and flying. He would also like to start a business for his commercial art and screen printing.

Originally from Puerto Rico, Carlos is choosing to build his home in Florida to be close to family and medical care.

Carlos says it’s heartwarming to know HFOT’s donors and supporters care about him so much. “Thank you from the bottom of my heart. Freedom isn’t free, and some of us Veterans are still paying the price,” he says. 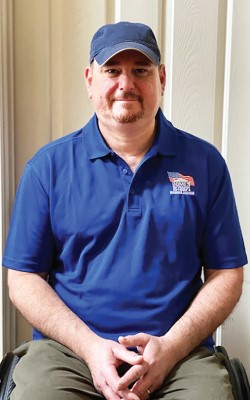