Vincent Reynolds grew up playing Army, so joining the military felt like a natural decision. He enlisted as an indirect fire infantryman with the 1st Battalion, 23rd Infantry, 2nd Infantry Division after high school.

On Sept. 3, 2012, Staff Sergeant Reynolds was on his second deployment when he stepped on an improvised explosive device (IED) in Kandahar Province, Afghanistan. SSG Reynolds’ first thought during the explosion was checking to ensure his Soldiers were alright, not even realizing he was injured himself. The blast resulted in the loss of his left leg and damage to his right leg.

Now medically retired, Vincent enjoys hunting, fishing, golfing, camping, and spending time with his two daughters and wife Denise. Vincent says his specially adapted custom Homes For Our Troops home helps him be a better father. His previous home was two stories, which made it difficult for him to carry his youngest daughter up and down the stairs. In his single-level HFOT home with an open floorplan and wide doorways and hallways, Vincent is able to care for his daughter easily. “I could write a book about how this home changed not only my life physically, but how it makes me feel a lot less stressed,” he says.

With the daily challenges of navigating a non-adaptive home lifted, Vincent now has more energy to put into his current pursuits. He works cattle and horses at the HFOT home and, when all the chores are taken care of, he guides remote hunting trips, and is a co-host on Pursuit Channel’s Old School Outdoors hunting show.

Originally from Pennsylvania, Vincent chose to build his home in Texas for the warm climate and to be close to Denise’s family.

Vincent is thankful to HFOT’s donors and supporters who made the dream of living in an adapted home possible. “It is humbling to know there are people out there who care,” he says. 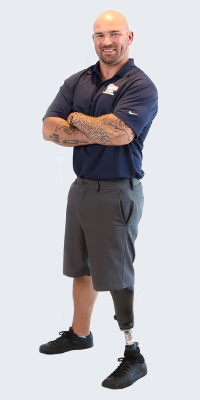