Vicente Ramirez enlisted in the Army as an Infantryman hoping to find a more interesting and exciting career than the one he had as an iron laborer.  In January 2006 he deployed to Iraq with Bravo Company, 1st Battalion, 36th Infantry, 1st Brigade, 1st Armored Division. Surrounded by his new family of comrades, Private First Class Ramirez had finally found the adrenaline rush he craved by experiencing combat overseas.

On Sept. 24, 2006, while Private First Class Ramirez was filling in for his squad’s routine driver, a call came in to request assistance for a teammate who had been wounded while out on surveillance. En route to help with the rescue and medical evacuation, PFC Ramirez’s vehicle ran over an improvised explosive device (IED). Upon regaining consciousness after the blast, PFC Ramirez did not know how badly the vehicle was damaged, but knew he had to leave to scene. He attempted to drive further to safety, but quickly realized that the vehicle was too damaged to move. Moments later, members from his platoon arrived in a second vehicle to take him and the others back to camp. On their return trip, they hit another IED, filling the vehicle’s interior with flames. The group evacuated the burning vehicle and took shelter nearby. PFC Ramirez and his teammates were then picked up by a different platoon and returned to Camp Ramadi, where he was treated for his injuries.

PFC Ramirez spent four months recovering at Walter Reed. After repeated infections and multiple surgeries, he elected to have his left leg amputated.

In the years since his wartime injury, Vicente has returned to doing the activities he loves, including competitive sports, riding a motorcycle and working on cars, while working part time at a local commissary. He enjoys playing sled hockey, and hopes to get back into playing softball, although he finds it difficult to stand for long periods. Previously, he lived in a non-accessible home, which prevented him from resting properly. The end result was constant pain, which Vicente said brought about frustration, often causing him to rush through events and activities with his family. His adapted home from Homes For Our Troops affords him the ability to maneuver a wheelchair because of its open floor plan, eliminating much of his daily stress.

With the financial burden of a monthly mortgage lifted, Vicente is able to focus on providing a future for his two children. He chose Florida as the location of his new forever home to be close to family. He would like to continue his education in criminal justice.

Vicente says he is grateful to supporters, who through the gift of this home, are enabling him to rebuild his life. He appreciates knowing that the American people care about his recovery and his family’s future. “These homes not only help Soldiers, but most importantly, these homes help Veterans be more productive individuals to family and friends,” he says. 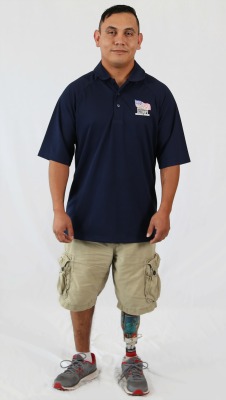