On Nov. 30, 2012, while patrolling an alley with his partner, Army Specialist Geoffrey Quevedo lost his left leg below the knee and his left arm below the elbow when an improvised explosive device (IED) detonated. SPC Quevedo was 20 at the time of his injury and on his first deployment. HFOT home recipient Quinton Picone was injured in the same blast.

Upon his medical evacuation, while drifting in and out of consciousness, SPC Quevedo continued to call out for his partner. He was then airlifted to Landstuhl, Germany, where he was stabilized. Since his injury, SPC Quevedo has undergone various physical therapies.

Geoffrey married his wife Samantha in December 2014 and they are now proud parents to two young boys and a girl. Geoffrey enjoys going to the shooting range and playing soccer. Since moving into his HFOT home, he has started running more and often runs races with Team HFOT. He is currently pursuing a master’s degree in clinical and educational psychology and hopes to become a counselor or work with troubled youth.

Geoffrey would like to thank Homes For Our Troops for honoring him and the sacrifices that he and other Veterans have made. 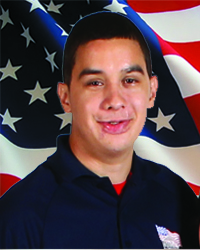 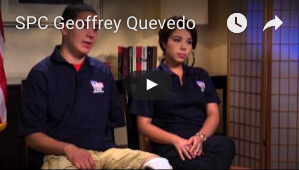