While growing up in foster care and group homes in New Jersey, Quincy Lopez met a Big Brother through a program that helped him understand volunteerism and began shaping his desire to serve his community. On September 11, 2001, when terrorists attacked the United States of America, his path became larger than his community; it became clear to him that he needed to serve his country.

On January 26, 2006, Army Sergeant Lopez was serving as an Intelligence NCO with the 10th Mountain Division in Baghdad, Iraq, when his convoy was hit by an improvised explosive device (IED). The blast resulted in severe injuries to his lower right leg which was later followed by a below the knee amputation. Since then, he has undergone several surgeries with more scheduled for the future.

Since being injured, Quincy has not lived in an accessible home, causing him to further injure himself, setting back his recovery. He often gets disheartened when barriers prevent him from navigating his current home safely.  Friends with several HFOT home recipients, including Marine Cpl Tim Read and Army SSG Chris Gordon, Quincy has seen first-hand the impact of a Homes For Our Troops home.

In a specially adapted custom Homes For Our Troops home, Quincy will have a safe, accessible environment to raise his son, Warren. With a single level open floorplan and wide doorways, Quincy will be able to utilize his wheelchair, mitigating further injury. With the freedom and independence he will regain, Quincy will have more time to pay it forward. He enjoys coaching youth sports, mentoring Veterans, and also works with various nonprofits including being a legal advocate for children in court cases concerning topics like adoption and child custody. Quincy also has a passion for playing adaptive sports, and competes on the Paralympic Bobsled team with future HFOT home recipient Army SGT James Klingensmith. The financial freedom of a donated home will assist Quincy in his dream of opening his own nonprofit for Veterans to mentor foster children. He strongly believes that giving Veterans a new mission of mentoring foster children will help create a support system and bring awareness to both Veteran issues and children needs.

Originally from New Jersey, Quincy is choosing to build his home in Florida for its proximity to the VA Medical Center, Veteran friendly environment, and the highly rated school district.

Quincy would like to express his immense gratitude for HFOT’s donors and supporters for giving Veterans and their families hope. “You are giving us light when we have darkness all around us. You are giving us back our independence and our families. Thank you from the bottom of my heart!” 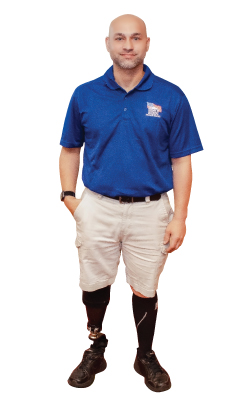