In 2007, Army Specialist Adam Putt deployed as a rifleman with the 2nd Battalion, 3rd Infantry, 3rd Stryker Brigade, 2nd Infantry Division to Baghdad, Iraq. On Aug. 2, 2007, one month into his deployment, he was in an improvised explosive device (IED) explosion. The blast killed several of SPC Putt’s squad members, and severely injured him and others, including fellow HFOT Veterans Michael Gower and Oscar Guerra. SPC Putt lost both legs as a result of the blast.

Adam usually wears his prosthetics throughout the day, but when at home he prefers his wheelchair. He says having a wheelchair-accessible home from Homes For Our Troops is a blessing. He especially enjoys having an adapted bathroom and kitchen. His wheelchair could not fit in several rooms in his previous home, which made it difficult to do daily, routine activities such as showering or preparing a meal.

Adam’s greatest concern in his previous home was being able to provide for his wife Tiffany and their two sons. Because of his injuries, Adam felt like he was not able to fulfill this role. He says receiving a home adapted to his injuries mitigates this worry and enables him to focus on finishing his degree in biology.

Originally from Oklahoma, Adam and Tiffany chose to remain in the state and had their home built outside Oklahoma City for the area’s excellent school district.

Adam is grateful to HFOT’s supporters and donors who contributed to his build and says the home is a way for him to move forward. “Injured Veterans lose their mission and goals, not just limbs. In this home I have regained my freedom and independence, allowing me to carry on another mission,” he says. 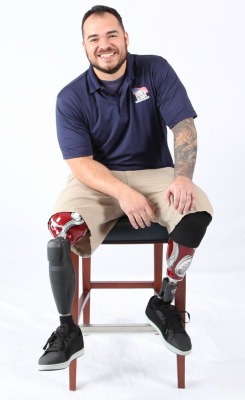