On Sept. 20, 2006, Army Specialist Luis Puertas lost both legs after an explosively formed penetrator (EFP) explosion in Baghdad, Iraq. SPC Puertas was the driver of the lead HMMWV on a daily patrol near Sadar City when an unseen EFP, planted at the base of a light pole, launched into the vehicle, amputating both of his legs on impact, and leaving him trapped beneath the 400-pound up-armored door. Miraculously, his team was able to extricate him from the wreckage, and prepare him for medevac from the scene.

SPC Puertas is enrolled in college, and working on an associate’s degree that he hopes to eventually use in the field of prosthetics. He will be competing in the 2020 Paralympics in Tokyo in the 200m sprint for track and field in August 2021. He would like to thank those who give of themselves to assist the injured troops returning from the war, he knows first-hand the difference it can make in their lives. 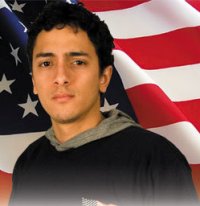