Growing up in a small town, Bryan Price felt there were limited options for personal growth, and the military presented an opportunity for a career and adventure. He enlisted in the Army as an Infantryman.

On June 15, 2006, Staff Sergeant Bryan Price was serving in Baghdad, Iraq, with 2/502 Infantry, 2d Brigade, of the 101st Airborne Division, and assigned to a Military Transition Team (Mitt), when an improvised explosive device (IED) detonated on the left side of their vehicle. The blast, which was followed by a firefight with insurgents, resulted in shrapnel injuries to his back and legs which caused a spinal cord injury, paralyzing him from the waist down.

Bryan was airlifted to Germany for surgery and later transferred to Walter Reed Medical Center. He eventually went to Fort Campbell where he did physical therapy and gained the ability to walk slowly with a walker.

Now medically retired, Bryan has a passion for cross-country skiing and biathlon. Being on the snow mitigates the restriction of his wheelchair and gives him the freedom he lost with his injury. He not only loves playing the sport, but also enjoys coaching. While Bryan has found freedom outdoors, he still faces limitations within his current home. It is hard for him to be the dad he wants to be because he is unable to navigate the home safely in his wheelchair.

Bryan has seen firsthand from HFOT home recipients the impact of a Homes For Our Troops specially adapted custom home. He looks forward to living his life with ease, and feeling comfortable and having the ability to live without fear in his home.

Originally from Missouri, Bryan is choosing to build his home in Wyoming, where he currently lives, because of the good community and skiing clubs.

Bryan would like to thank HFOT donors and supporters for one of the greatest gifts you can give. “Not only are they helping me, but more importantly they help my family by giving me ease of mind and safety that enable me to be a father and a husband.” 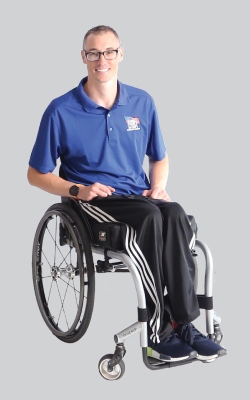