Adam Popp joined the military shortly after high school, following the legacy of many of his family members who also served. He joined the Air Force as an explosive ordnance disposal (EOD) technician and loved the sense of purpose he felt while serving and forming connections with his fellow comrades. He deployed to Laos and Diego Garcia before going on his first combat tour to Iraq in 2004.

During his second combat deployment, on Dec. 7, 2007, Tech Sergeant Popp was removing improvised explosive devices (IEDs) with the 455th EOD in Paktia Province, Afghanistan, when one of them detonated. The blast resulted in the loss of his right leg, damage to his right arm, traumatic brain injury (TBI), and hearing loss.

Now medically retired, Adam has been living in non-accessible housing ever since being injured. This forces Adam to constantly go up and down the stairs on his prosthetic, causing him constant pain. Living in this environment for more than a decade has taken a toll on Adam physically and emotionally. Though he has not used his wheelchair in years, he knows he will need it as he gets older. “The challenges aren’t going to get any easier,” he says.

Regaining his freedom and independence in a specially adapted custom Homes For Our Troops home will be beneficial in all other areas of Adam’s life. In December 2021, he got married to his wife Amanda. He received his master’s degree in rehabilitation counseling from George Washington University, and hopes to work with Veterans. Adam has used his experiences to support others ever since he was injured. He is a board member at the EOD Warrior Foundation, a nonprofit that assists wounded, ill, and injured EOD Servicemembers and their families, and families of the fallen. He became certified as a peer mentor with Walter Reed in 2008, and regularly visits injured Veterans to support their recovery. Not having the daily stress of living in a non-adapted home and the financial freedom of not paying a mortgage will give Adam the foundation to pursue his career and continue serving others. “I will be able to do more meaningful and impactful things,” Adam says.

In recent years, Adam has become more physically active and has completed several marathons. He would like to support other home recipients by running for Team HFOT. He has been selected as one of 17 members of the 2020 US Military Sports Elite Athlete Program, a nonprofit that expands opportunities for athletes and para-athletes who are competitive at a world or national level. Having an accessible shower and tub in his specially adapted custom home will help Adam rest and recover between races.

Originally from Indiana, Adam is choosing to build his home in Colorado.

Adam is grateful to HFOT’s donors and supporters who will contribute to the building of his HFOT home. “The benefits the Veteran receives from this program will only increase as they inevitably age and become less mobile. For me, this is a hard reality, but because of HFOT, this gives me hope and confidence that many of these concerns will be reduced or removed by having an accessible home,” he says. 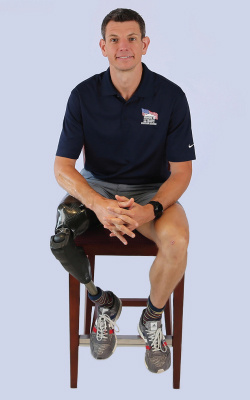