Chad Pfeifer was in college, when the 9/11 attacks occurred. Feeling the urge to take action for his country, Chad joined the Army as an Infantryman after finishing school.

On April 12, 2007, during his first combat deployment, Army SPC Chad Pfeifer was serving with the 3rd Battalion, 509th Infantry Regiment, 4th Brigade (Airborne), 25th Infantry Division when his vehicle was hit by an improvised explosive device (IED) on their way back to base in Iskandariyah, Iraq.  The blast resulted in the loss of his left leg above the knee, right heel fracture, and partial hearing loss in both ears. SPC Pfeifer was first airlifted to Baghdad, and once back in the United States, he recovered at Brooke Army Medical Center.

Now medically retired, Chad loves spending time with his wife, Summer, and their three boys: Grady, Lucien, and Barrett. When he’s not coaching his boys’ baseball teams, Chad is an avid golfer. Although he leads an active lifestyle, Chad faces daily obstacles within his home. Due to the carpet throughout the two-story home making it difficult to maneuver a wheelchair, Chad is forced to wear his prosthetic to accomplish tasks. Summer worries that Chad will fall while taking a shower or trying to reach the kitchen cabinets, risking further injury. Receiving a specially adapted custom home will give Chad a safe environment to rest and recover, giving him more time to spend doing the things he loves. He looks forward to spending more time outdoors and on his hobbies.

Originally from Idaho, Chad is choosing to remain in the state to be close to family.

Chad would like to thank HFOT donors and supporters for this life-changing opportunity. “We know how appreciative several of the recipients are and how much easier their lives have been since receiving their house. The impact is huge.” 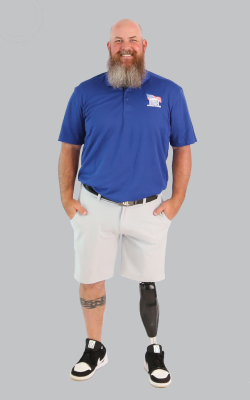