On Oct. 12, 2012, Army Specialist Sean Pesce, a fire support specialist with the 2nd Battalion, 75th Ranger Regiment, was clearing compounds with his unit in Ghazni Province, Afghanistan, when insurgents opened fire. SPC Pesce, who was on the rooftop across from the building they were clearing, was shot 13 times, paralyzing him from the waist down. His sergeant, Thomas MacPherson, was killed beside him from a shot to the chest. SPC Pesce was pulled to safety by his unit as the firefight was still going on.

SPC Pesce was first evacuated to the hospital in Ghazni, where they removed his spleen and right kidney. He was then transferred to Bagram, and then Landstuhl, Germany, before returning to the United States at Walter Reed, where he stayed for one month. He was also treated at VA hospitals in Tampa, Fla., and West Roxbury, Mass. He has since returned to his home state of Connecticut, where he works out at home to maintain his upper body strength.

Now medically retired, Sean loves to golf, play video games with his brothers, spend time with friends and travel. He is also a member of the Military Order of the Purple Heart. He has plans to study business and political science at the University of New Haven, and would like to open a coffee shop and restaurant in his town. He says now that he is living in his specially adapted Homes For Our Troops home, he will have the confidence to achieve these goals. The wide doorways and reachable appliances allow him to live on his own and do activities every young adult does, such as shop, cook and go to school.

Sean says if it weren’t for HFOT supporters, he would not be able to have a home of his own. “I could say ‘thank you’ for what you do a million times over, but that would never be enough. You give people like me a chance at having an independent life and freedom.” 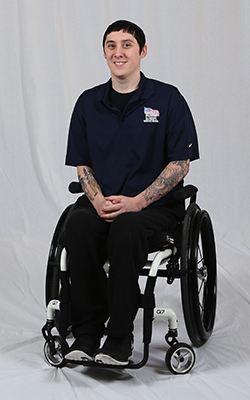