Marine Lance Corporal Jorge A. Ortiz enlisted in the Marines immediately after high school. A year and a half later, at the age of 19, he was on his first deployment as a Combat Cameramen with the 3/5 Marines when he lost both of his legs, and sustained severe arm injuries in an improvised explosive device (IED) blast in Sangin, Afghanistan on Jan. 15, 2011.

An early morning search for weapon caches in identified homes required many elements of LCpl Oritz’s team to ensure the weapons had been identified and destroyed. After the Mine Sweeper and Engineer identified the IED’s in the booby-trapped house, one team pulled security while another began inventorying the cache.

As LCpl Ortiz prepared to take pictures of the cache prior to its destruction, and while walking back into the house with his camera, he stepped on a pressure plate that ignited an IED that was not identified. Alert immediately following the blast, LCpl Ortiz heard voices asking if anyone had been hit.

He realized the severity of his injuries when he heard his teammates yelling that they had found him in the crater created by the explosion. Losing consciousness at that point, Jorge awoke to find his teammates working to save his life; applying tourniquets and medication to help keep him from going into shock. Placed on a litter near a creek, his teammates carried him through the freezing cold water. LCpl Ortiz was next loaded onto a British helicopter and transported to Bastion Hospital.

Next airlifted to Landstuhl, Germany, he was stabilized for transport to Bethesda National Medical Center where he would spend two months before being transferred to the VA Palo Alto where he would spend six months in treatments and therapies. LCpl Ortiz’s medical team felt that Balboa Naval Medical Center in San Diego could accommodate his injuries at a higher level and he was transferred to San Diego, receiving treatments and therapies for the next year. Retiring in August 2012, LCpl Ortiz received his specially adapted Homes For Our Troops home in Valley Center, Calif., in May 2016.

LCpl Ortiz enjoys spending time with friends and family and spends a considerable amount of time involved with athletic programs in the San Diego area. Surfing, SCUBA diving, swimming, and lifting weights are some of Jorge’s favorite sports. He married his wife, Aiyanna, on Valentine’s Day 2015. Aiyanna served in the Army, deploying to Iraq in 2006 as a female engagement team member with Infantry units from 3rd Stryker Brigade, 2nd Infantry Division. She currently serves in the Navy Reserve and is a school district employee coaching volleyball for boys and girls. Jorge and Aiyanna welcomed their first child, a baby boy, in January 2017.

LCpl Ortiz is overwhelmed by the kindness, generosity, and selflessness of the American people who have helped him during his recovery. “I am truly touched by the outpouring of support. The assistance given by Homes For Our Troops greatly improves my life by decreasing the daily stresses of my injuries by providing me with a home built for my specific needs. Thank you so much for this amazing gift.” 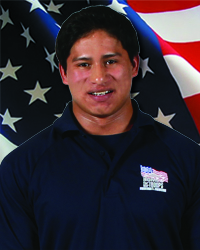