In May 2004, Army Corporal Nick Orchowski was on his first deployment when he became paralyzed after being thrown from the gunner’s hatch of a vehicle that was hit during an insurgent attack in Baghdad, Iraq.

Married only four days before deploying to Iraq, CPL Orchowski was the main gunner of the lead vehicle in a convoy when they came under attack on the main supply route leading into Baghdad. CPL Orchowski’s truck was struck by another vehicle, the impact throwing Nick out of the gunner’s hatch. With his right shoulder pushed into his cervical spine area, CPL Orchowski sustained fractures of C4, C5, and C6 vertebrae and was immediately paralyzed from the neck down.

As a medic worked to save his life, shots continued to ring out and the ambush raged on. Nick’s last thoughts before falling unconscious were of his wife and unborn child…, “This wasn’t supposed to happen…is this how it’s going to end?” Airlifted to Landstuhl, Germany and then to Walter Reed Army Medical Center, his next memory was waking up on a respirator, unable to move, his head in a HALO device. As the reality of his condition set in, CPL Orchowski was determined to push for his recovery.

Multiple surgeries and medications were tried to remedy the complications of his injuries. A serious infection complicated things and Nick endured his seventh surgery to try to find the root of the infection. While on the operating table, as the surgeon made an incision in the back of his neck, the spine popped into place…alleviating the pressure on the vertebrae, thereby un-pinching the spinal cord and reconnecting the nerve pathways.

Nick is now diagnosed with Incomplete Quadriplegia. There is no way of knowing if he will again be fully paralyzed in the future, but he has vowed to live each day to the fullest. Left with the complications of a seizure disorder and moving with the aid of braces on his legs and right wrist, Nick continues to push for his own recovery. Nick enjoys spending time with his wife, Jamie, and their two children. Nick is a member of the Paralyzed Veterans of America, the Freedom Hunters, and American Military Families. An avid outdoorsman, he enjoys hunting and fishing. He looks forward to raising his children and being a great husband and dad, as well as doing more to assist Veterans.

Nick would like to thank those who helped to provide him with a specially adapted custom home from Homes For Our Troops. “Thank you for your support and kindness, not only have you honored me as a Veteran of combat, but you have also changed my family’s lives as well. I no longer have to adapt to the un-adapted. I have had to rely on other people to help me with most things, in my new home I am more independent. Homes For Our Troops and their volunteers and donors depict the True American Spirit. Thank you.“ 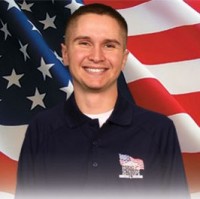