Army Specialist Christopher Ochs was on his first deployment when he became paralyzed after the truck he was riding in struck an improvised explosive device (IED) while on a patrol in Mehter Lam, Afghanistan on April 6, 2011.

While returning from an Afghan Police Station after a patrol, SPC Ochs was in the turret of the first truck in a four vehicle convoy. The force of the IED blast threw SPC Ochs, and the turret itself, from the truck; severely injuring his spinal cord, SPC Ochs was left paralyzed from the waist down.

Transported to Bagram Air Base, SPC Ochs was stabilized in-country and airlifted to Landstuhl, Germany before arriving at the Richmond VA where he remained for four months before being released from the hospital.

Christopher is involved with the Vietnam Veterans of America and the American Legion. He enjoys volunteering in his community with both the Goodfellows and the local Rotary. He enjoys trap shooting, and is hoping to pursue a college degree in political science at Eastern Michigan University.

SPC Ochs appreciates all of the support he has received, stating, “This home gives me the freedom to be more independent and allows me to do more for myself and not have to rely so much on others. Thank you for this opportunity.” 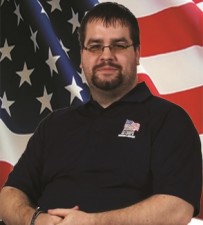