Marine Corporal David Noblit, Jr. was on his second deployment when he lost both of his legs above the knees, and sustained severe damage to his left arm in an improvised explosive device (IED) blast in Sangin, Afghanistan on Oct. 21, 2010.

What started as a normal day found Cpl Noblit on a morning patrol. A local told the squad’s interpreter that insurgents had been placing IEDs in a compound nearby. Working with a team, Cpl Noblit began clearing the compound. While completing the task, an unidentified IED was triggered, throwing Cpl Noblit through the air. The blast traumatically amputating both of his legs. Cpl Noblit also sustained severe damage to his left arm.

Lifesaving measures at the scene readied Cpl Noblit for transport as more than a dozen insurgents’ waited to ambush the group while en route to the landing zone. Following a firefight, and safely onboard the helicopter, Cpl Noblit was evacuated to Camp Leatherneck Hospital in Afghanistan.

Later airlifted to Landstuhl, Germany, David used a satellite phone to call his wife Amanda while on the medical transport plane airlifting him to Walter Reed Medical Center.

Cpl Noblit enjoys hunting, fishing, camping, and anything to do with the outdoors. He also enjoys football, baseball, and spending time with his family. His wife, Amanda, and young son, Cayden have been by his side through his recovery. Since receiving his specially adapted custom home, David has become an assistant football coach at Southern Columbia Area School District.

David is grateful to be living in a specially adapted Homes For Our Troops home, where he has full access to all areas of his home. He says, “A lot of people say ‘thank you’ to our Veterans…I would like to say thank you to the people and donors who are made my dream of an accessible home a reality.” 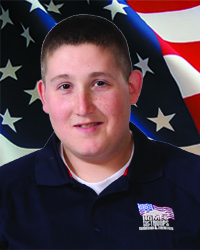