On April 6, 2011, Marine Corporal Tony Mullis was on his second deployment when he lost both of his legs and sustained severe injuries to his right arm after a bomb exploded in Southern Afghanistan, the day after the birth of his first child. Cpl Mullis was on a mission to clear abandoned compounds when he saw wires indicative of an improvised explosive device (IED) and started moving his teammates out of the area.

A footstep triggered one of the IEDs, the blast throwing Cpl Mullis into the air before landing on his back on a pile of rubble. The medic on scene placed tourniquets on both of Cpl Mullis’s legs and his right arm.

Arriving at Bethesda Naval Medical Center, Cpl Mullis was met by his wife and newborn son and began his long road to recovery which has included seven blood transfusions and more than fifteen surgeries to date.

Cpl Mullis enjoys spending time with his wife Jeanie and their children. Visiting family and friends and playing with his children are some of Tony’s favorite activities. He also enjoys baseball games, hunting, and fishing. Currently enrolled in college, Cpl Mullis hopes to one day work as a game warden in Georgia. He also works for an automotive parts company in town and coaches his son’s recreational sports teams.

He and fellow HFOT Home Recipient Michael Boucher started a nonprofit called Amputee Outdoors, which helps other injured Veterans recover emotionally and physically through activities including hunting and fishing. 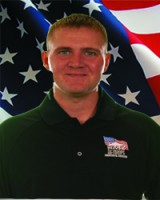