As a junior in high school, Nicholas Morris watched the terror of September 11, 2001, unfold on TV during history class. He became motivated to join the military and started his service at Valley Forge Military Academy for early commissioning and then finished with ROTC at the University of South Carolina. Almost ten years later in Afghanistan, he would witness the brutality and horror of the ensuing conflict firsthand while serving as a rifle platoon leader with the U.S. Army.

On June 7, 2011, while on a resupply mission with 1st Battalion, 133rd Infantry, 2nd Brigade Combat Team, 34th Infantry Division, in Laghman Province, Afghanistan, the vehicle carrying 1LT Nicholas Morris and several others struck a pressure plate improvised explosive device (IED). The explosion occurred directly under 1LT Morris’ seat, injuring four of his Soldiers and killing the interpreter riding with them.

Nick was the most critically injured, requiring an emergency tracheotomy in the field and several units of blood. Additionally, he sustained damage to both legs, severe traumatic brain injury (TBI), and a broken back and jaw. Transported to Jalalabad for stabilization, Nick was then evacuated to Landstuhl and eventually brought stateside to Walter Reed, where he underwent over 30 surgeries in three months. Doctors eventually amputated his right leg after months of limb salvage efforts. He currently wears a brace on his left leg, which he and doctors may elect to amputate if pain and difficulty with this limb persist.

Now medically retired, Nick lives in Colorado and has a goal to climb all 53 of Colorado’s highest summits and be the first amputee to reach all 58 of the state’s peaks. Now that he is living in a home adapted to his injuries, Nick says he will now be able to focus on his future. The financial freedom of living without a mortgage, he says, helps mitigate the stress he experiences. Additionally, Nick says he has a sense of control and security knowing he will always have a home to call his own. Nick is able to rest in his wheelchair after wearing his prosthetic and brace all day, alleviating his chronic back pain as well.

Nick enjoys hiking, golfing, gardening and working out. He wants to thank HFOT and its supporters for giving him a second chance at life and the opportunity to establish permanent roots. “It’s because of people who support HFOT that Soldiers are able to rebuild their lives and finally move on from the tragedy and horror they have faced,” he says. “This is the most wonderful gift a wounded Veteran can receive.” 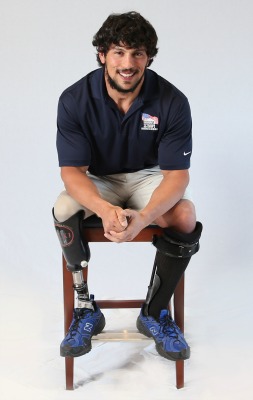