Marine Corporal Evan Morgan was on his second tour of duty in Iraq when the vehicle he was riding in was struck by a roadside bomb. Cpl Morgan, then 23, lost both legs and the sight in his right eye in the explosion.

Despite spending more than 15 months in hospitals, Morgan treats life as a precious gift. “You cannot change the past,” he says, “So, you do what you can with what you’ve been handed.”

As a musician and singer/songwriter, Evan is now using his music to help other injured Veterans. A portion of the proceeds from his album released in April 2014 benefited the Wounded Heroes Fund, an organization in Morgan’s hometown of Bakersfield, Calif., that provides assistance to Veterans returning home.

Homes For Our Troops is proud to have presented this home to Evan Morgan and his family on Nov.14, 2009. Thank you to all who supported his project. 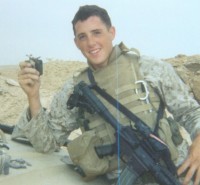