On Dec. 7, 2010, Marine Corporal Christopher Montgomery was on his third deployment when he lost both of his legs and severely injured his left arm in an improvised explosive device (IED) blast in the Northern Helmand Province of Afghanistan with 3/5 Dark Horse Marines. While on a patrol, his left leg hit an IED buried in a pile of rubble, throwing him in the air, traumatically amputating both of his legs and severely injuring his left arm. Sustaining abdominal injuries and a burst eardrum as well, Cpl Montgomery reached for his tourniquet and combat Lifesaving Bag in order to start treating his injuries, only to find that they had been blown away in the blast. Quick reaction by his teammates helped stabilize and prepare him for evacuation.

Transported by truck to the local Forward Operating Base (FOB), Cpl Montgomery was medevaced to Camp Bastion and then Bagram Air Base before being airlifted to Landstuhl, Germany. Once stabilized, Chris was flown to Bethesda National Naval Medical Center where he spent two months enduring surgeries before being transported to Brooke Army Medical Center in San Antonio.

Cpl Montgomery enjoys working out at the gym, hunting, fishing, and many sports. He hopes to attend college and eventually own his own business. Since receiving his home, Christopher had married his wife Cassie and started taking welding classes and is studying sustainable agriculture. The youngest son in a large family, Chris hopes to one day raise a family of his own.

Cpl Montgomery would like to thank everyone for their support and helping make the possibility of living in a barrier-free home a reality. He says his home has greatly improved his quality of living. “Everywhere I go I have to worry about accessibility and if I’m going to need someone to help me. Being a former Marine and a very proud person, this affects me in ways people cannot understand. I’m a very independent individual and this home alleviates any stress that may come with travel or just visiting someone else’s house. No matter where I go, I always know that I get to return to a home specifically suited for me. It’s an unbelievable feeling,” he says. 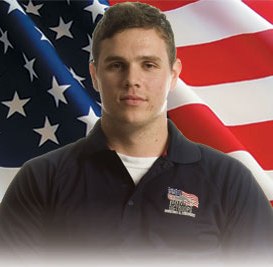