Upon his arrival at Brooke Army Medical Center in San Antonio he underwent many surgeries including the amputation of both legs above the knee and extensive skin grafting. In July 2012, he was transferred to the Poly Trauma VA Hospital in Palo Alto and then to Balboa Naval Hospital in San Diego for physical therapy.

Christopher hasn’t let his injuries prevent him from having an active lifestyle. He participates in wheelchair fencing and adaptive Crossfit. He is also an avid duck hunter with his brother and father. Despite his busy schedule, Christopher still faced challenges in his daily routines in his previous home. His specially adapted home from Homes For Our Troops with widened doorways and hallways, hardwood flooring, and a roll-in shower alleviates many of his challenges. The home also allows Christopher to have a fenced in yard or enclosed area for his service dog, Simon. Without the worry about his mobility, Christopher is able to concentrate on school and pursue a career.  He is currently pursuing an associate’s degree in history. He and his wife Vi are got married in September 2018.

Christopher is grateful to HFOT supporters for the gift of a home that allows him to live independently. “A special adaptive home is the foundation to continued recovery and is life changing for those severely injured,” he says. “As one of many who are doing their best to regain a sense of purpose and direction in life, thank you for what your organization is doing for so many.” 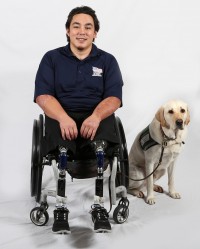