On Aug. 22, 2007, Army Staff Sergeant Michael Montange was on his third deployment to Iraq serving with the 307th Brigade Support Battalion, 1st Brigade, 82nd Airborne Division when he was severely injured. While leading a convoy on Route Sword in Baghdad, SSG Montange’s vehicle was hit by an explosively formed projectile (EFP). Shrapnel from the blast pierced through the armored door of the vehicle into SSG Montange’s hip.

Once transferred back to the United States, Michael endured more than 50 surgeries throughout his year and a half stay at Walter Reed Medical Center. During that time, doctors amputated Michael’s leg at the hip and removed his tailbone and left kidney.

Now medically retired, Michael has taken up golfing using a SoloRider and hopes to teach others with injuries how to play. He is also a certified diver. His specially adapted custom Homes For Our Troops home significantly reduces the obstacles he faces within his home, giving him more energy to put into these endeavors. In his previous home, it was difficult for Michael to access the bathroom in his wheelchair because the doorways were too narrow. He often risked injuring himself when trying to reach the cabinets and appliances in his kitchen. A bathroom with a roll-in shower, and a kitchen with pull-down shelves make it easier for Michael to bathe and prepare meals for himself.

The home provides a stable and secure environment for Michael and his wife, Cami Sue. Not having the everyday stress of dealing with a non-accessible home enables him to spend more quality time with his two children, April and Chase.

Michael grew up in Michigan, but his love of boating and fishing drew him to Florida where he had his HFOT home built.

Michael is appreciative of HFOT’s donors and supporters who contributed to the building of his HFOT home. “This home improves my everyday life,” he says. 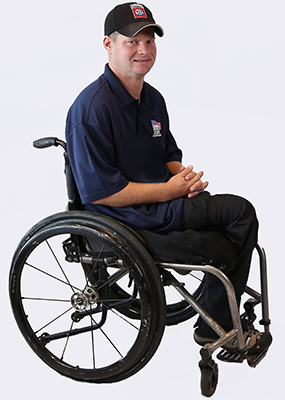