On Oct. 23, 2003, Army Sergeant Shawn Monroe, a team leader with the 527th Military Police Company, was training Iraqi police and doing route security when mortar fire hit while he was waiting outside a Baghdad police station. SGT Monroe lost his left leg and sustained severe damage to his right leg as a result of the attack.

Homes For Our Troops, with the help of the local community, built a specially adapted custom home for Shawn and his family in Santa Fe, Texas. The family received the home on Dec. 14, 2007.

Shawn is now a program advocate for the Army Wounded Warrior Program in Houston and is a substitute teacher for the Santa Fe public schools. He is also a singer and often sings the National Anthem at the annual HFOT fundraiser, the Dallas Fort Worth Clayshoot. He and his wife Kristi have three sons – Jonathon, Benjamen, and Mathew. The oldest, Jonathon, is in college, Benjamen does karate, and Mathew is in Boy Scouts. Kristi homeschools the younger two sons. Kristi also served in the Army as a medic.

Shawn says he is able to raise his sons without physical limitations in his home. He and Kristi say living mortgage-free has enabled them to live comfortably with no financial burden. 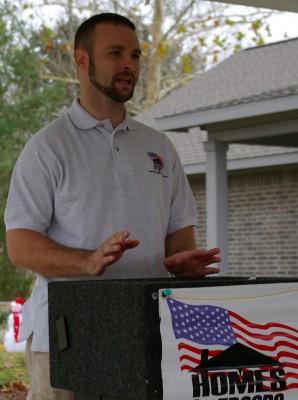