Looking to steer his life the direction he had always dreamt of, Gabriel “Gabe” Monreal adjusted his route from college to the military by joining the United States Army as an Infantryman, following his father’s footsteps.

On Aug. 24, 2010, Sergeant First Class Monreal was on his third combat deployment in Afghanistan as an Infantryman with the 2/327 Infantry Battalion, 101st Airborne Division, when he was hit by an 82mm recoilless rifle round, resulting in injuries to his abdomen, thighs, forearms, and the amputation of his left leg below the knee. After a three week stay at Walter Reed Medical Center, he was transferred to the Center for the Intrepid (CFI) in San Antonio. There, Gabe was assigned to the Warrior Transition Battalion (WTB) for eight months while he underwent physical therapy and recovery. After leaving WTB, he continued serving at Army North for three years before returning to CFI as the firearms training simulator (FATS) instructor. His job was to teach active duty and retired Service Members how to move and shoot again with their prosthetics and injuries. In December 2017, after over 20 years of service, Gabe retired from the military.

Gabe now enjoys leading an active lifestyle with his wife Rachel and their four children, Matius, Layla, Noah, and Izabella. Together, they help other military families through a local San Antonio nonprofit called Operation Comfort, an organization that offers a variety of adaptive sports programs for injured Veterans. In Gabe’s free time, he enjoys riding his motorcycle, skydiving, barbequing, and working in his yard. Although Gabe does not let his injuries affect his active lifestyle, he knows wearing his prosthetic all the time will become less practical as he ages. In his previous home, he would often become discouraged because he could not maneuver his wheelchair around the narrow halls and doorways.

Friends with several HFOT home recipients, Gabe saw firsthand the impact a new specially adapted custom home makes for Veterans and their families. His HFOT home reduces the barriers Gabe experiences in his daily life. He is happy to have an accessible bathroom where he is able to shower safely. Another benefit is the open floorplan and accessible kitchen, where he is able to help his family cook and do housework. He is also able to access his yard more easily on the paved walkways surrounding the entire home.

Gabe chose to build his HFOT home in the Comal County area of Texas, for the excellent school district, and it is where the couple wants to retire.

Gabe is sincerely grateful to donors and supporters. “HFOT opens the door of all doors for the future. This gift not only impacts my wife and me, but more importantly, my kids, and our family’s generations to come.” 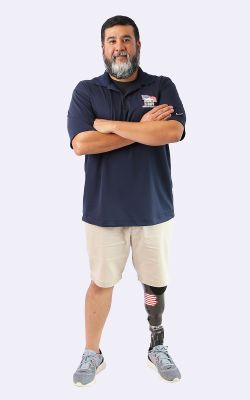