On March 11, 2010, Marine Lance Corporal Michael Martinez was five months into his first deployment when he lost both of his legs in an improvised explosive device (IED) blast in Helmand Province, Afghanistan.

While returning from a firefight, the fifth man in the foot patrol, LCpl Martinez stepped on an IED resulting in the traumatic amputation of his left leg below the knee and his right leg above the knee. Lifesaving measures by his teammates prepared him for medical evacuation to Camp Dwyer, the local Forward Operating Base (FOB). Mike was later transported to the Camp Bastion Field Hospital before being airlifted to Landstuhl, Germany, where he remained for four days. Arriving at Walter Reed Army Medical Center, LCpl Martinez endured more than twenty surgeries and began his physical therapies and rehabilitative treatment.

Michael enjoys hunting, fishing, and shooting. He is currently pursuing a bachelor’s degree in arts and looks forward to raising a family of his own in the future. He is grateful to live in a home that enables him to have the mobility and independence he strives to achieve so that he does not need to rely on his parents and family for his everyday needs.

When asked what he would like to say to the supporters of his specially adapted home built by Homes For Our Troops, Michael stated, “Thank you for giving me the chance to get back to having a normal life. I am so grateful for your assistance. This home makes a huge difference in my quality of life and I cannot thank you enough.” 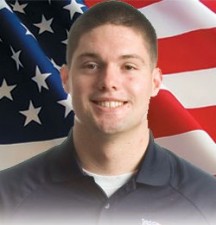