On March 16, 2010, Army Staff Sergeant Scott Millican was on his second deployment when he became paralyzed and sustained multiple fractures after the Mine Resistant Ambush Protected (MRAP) Vehicle he was riding in rolled over a 250-pound pressure-plate improvised explosive device (IED) in Ghazni, Afghanistan. While on a route clearing mission, eliminating IED’s in order to keep military routes open, the explosives were offset in order to explode underneath the vehicle, doing so directly beneath SSG Millican’s seat.

Transported to the Forward Operating Base in Ghanzni, his spleen was removed in order to save his life. The next thing SSG Millican recalls is waking at Walter Reed Army Medical Center, more than a week after arriving there from Landstuhl, Germany. Spending a month at Walter Reed, Scott was next transferred to the James A. Haley Hospital in Tampa, Florida, where he remained for eleven months. SSG Millican completed his therapies at Fort Stewart in Georgia.

Before his injuries, SSG Millican enjoyed golfing, hunting, and riding motorcycles. He has always enjoyed welding. The father of two children, Scott would like to go back to school and continue to work with his welding while being a supportive dad.

Receiving a specially adapted home from Homes For Our Troops took away Scott’s worry of providing a place for his family to live and enables him to have full access to all areas of the home without requiring any assistance. “I am able to get around the house better and I am able to do more things for myself,” he says. “I am able to focus my energies on being the best father I can be. Thank you for this opportunity.” 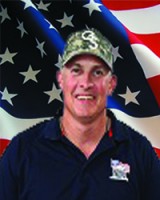