During his third tour on Jan. 9, 2012, Marine Staff Sergeant Omar Milan, an Explosive Ordnance Disposal Specialist, was conducting post-blast analysis in support of the 2nd Battalion, 6th Marines in the Nawa District of Afghanistan, when he was in an improvised explosive device (IED) explosion. The blast resulted in the loss of SSgt Milan’s right leg, significant injuries to his left leg, loss of fingers on his left hand and damage to his right arm among other injuries.

After enduring 40 surgeries and physical therapy for two years, Omar was medically retired in 2014. He and his wife, Michelle, have two daughters. He says his specially adapted custom HFOT home helps him and his family tremendously.

Omar loves woodworking and says it helps him deal with stress. In his previous home, there was not enough space for him to work on projects while in his wheelchair. His HFOT home gives him enough space for woodworking projects and allows him to access the bathroom and every part of the home.

Regaining his independence within the home, Omar now has more time to pursue other opportunities. He plans on going to school for mechanical engineering. He is also involved with several nonprofits including Spirit of a Hero, Cowtown Warriors, and Boot Campaign. Michelle also has more time for her plans. She is currently in school for nursing. Since receiving his HFOT home, Omar has turned his dream of opening his own woodworking shop into a reality by creating his own business named the Box Fin Woodshop and, beginning November 2019, he plans to sell his hand-crafted woodworking items at a local marketplace.

Omar chose to build his home in his hometown of Mansfield, Texas, for its excellent school district.

Omar is thankful to everyone who contributed to his build project. “My family and I are forever grateful for everything and every single person who make this possible.” 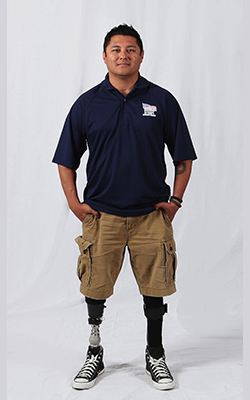