Marine Gunnery Sergeant Brian Meyer was six months into his third deployment when he lost his right leg above the knee, his right arm below the elbow, and sustained the amputations of his thumb and two fingers on his left hand in an improvised explosive device (IED) blast in Sangin, Afghanistan on March 14, 2011. An Explosive Ordinance Disposal (EOD) Technician, GySgt Meyer, and his team were working on disabling their 76th IED in six months.

Attempting to preserve the local infrastructure by removing the device from a road in a farming community, GySgt Meyer lifted the 15-pound explosive device when it exploded in his hand; amputating his hand, along with his right leg, and the thumb and two fingers on his left hand. Evacuated by helicopter first to Camp Bastion and then to Bagram Air Base in Afghanistan, Brian was stabilized for transport to Landstuhl, Germany.

Arriving at Bethesda Naval Medical Center within days of his injuries, he remained there for three weeks before being transferred to Balboa Naval Medical Center where he continues receiving treatments and therapies as an outpatient at this time. A motorcycle rider before injury, Brian is currently modifying his bike to make it adapted to meet his physical limitations.

Brian’s hobbies include organic gardening, landscaping, and landscaping design (planning functional landscapes). Currently pursuing a certification in Real Estate Appraisal and Inspection, Brian also mentors injured veterans and helps them find ways to get back to what brought them joy before injury. He is also featured on the online show, Adventures Enabled, which takes injured Veterans on expeditions across North America to experience the healing power of nature. Brian says that he is motivated by what he can accomplish once he puts his mind to something… he has yet to come to a roadblock that he hasn’t overcome. 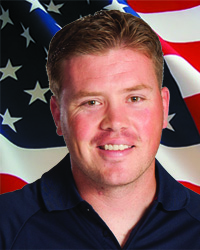