On April 30, 2011, Army Sergeant Nicholas Mendes, a gunner with the 10th Mountain 3rd Brigade, was critically injured when an improvised explosive device (IED) was detonated beneath his vehicle. The explosion, set off by a 1200-pound command wire device, caused multiple fractures of his vertebrae, paralyzing him from the neck down. The injury occurred in Sangsar, Afghanistan while he was on his second deployment; SGT Mendes had previously served in Iraq in 2008.

Recalling the moments after the blast when his teammates asked him if he was okay, SGT Mendes says he was unable to respond and woke up one week later at Walter Reed.

Following his month stay at Walter Reed, Nick was sent to the VA Center in Long Beach, Calif., (ICU and the Spinal Cord Injury Unit) where he began his recovery and therapy.  In September 2011 doctors removed Nick from the assistance of the ventilator and Nick was finally released from the hospital the next month in October.

Nick and his wife Wendy are grateful to have received a specially adapted home from Homes For Our Troops. In his previous home, Nick’s large power wheelchair barely fit in most rooms. “Entering and leaving the home was always a challenge,” says Nick, “so having widened doorways is great as well as the automatic doors so I can enter and exit on my own.”

Nick is dependent on Wendy for help with his day-to-day routine and many of their previous living challenges were with bathing and self-care. Nick’s motored chair did not fit in the bathroom; Wendy had to transport him to a reclining chair to get him in the bathroom.

The adapted features in Nick’s Homes For Our Troops home, including the roll-in shower, alleviate much of their worries. The track system removes the burden Wendy used to have of lifting Nick around the home. Wendy will now have more energy to devote to raising her four children and planning her future together with Nick. With a mortgage-free home, Nick can now focus on his recovery and follow a course to rebuild his life, plans of which include pursuing a career in real estate.

Says Nick, “A fully adapted home makes our day-to-day life so much easier, and we are so thankful for this opportunity from Homes For Our Troops.” 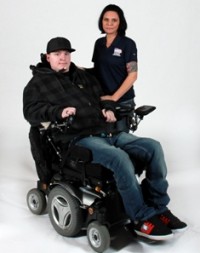