On July 23, 2011, on his second combat deployment, SFC Menchaca was shot in the head during operations in Afghanistan. Unable to speak and with his right side paralyzed, the doctors did not assess that he would ever make much progress. However, after intense therapy for seven months, Justin overcame the odds, and relearned how to speak, write left-handed, and walk, transitioning from a wheelchair to eventually using a cane and a manual leg brace. Justin returned to Ft. Bragg, where he moved into a training support role while continuing his rehabilitation efforts.

Now medically retired, Justin has not let his injuries stop him. He works out daily to maintain the progress he has made, and enjoys outdoor hobbies like shooting, hunting and fishing. He also hopes to learn how to scuba dive in the near future. Though Justin has made significant progress in his recovery, he still experiences obstacles within his home. In a non-adapted home, Justin constantly worries he will injure himself further by slipping and falling in the shower.

A new specially adapted custom home will give Justin the space to have his own service dog and the ability to continue his recovery. He says a single level home without stairs will be extremely beneficial. The special adaptations, like roll-under counters, a roll-in shower, and the accessible walkway around the home are also aspects Justin is looking forward to.

Originally from Tacoma, Washington, Justin is choosing to build his HFOT home in Texas, where he fell in love with the hill country and wants to settle down.

Justin would like to sincerely thank the HFOT donors and supporters for giving him the peace of mind, safety, and security of a fully adapted home. “Your gift enables me to have some freedom and independence, and will help me live comfortably and pursue my dreams.” 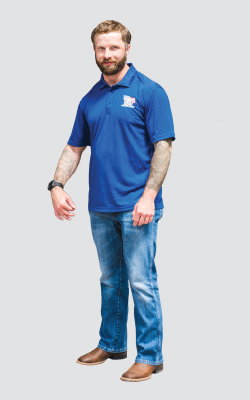