On December 12, 2007, Army Corporal McMinn was on his first combat deployment in Iraq as an Infantryman with the 2nd Battalion, 502nd Infantry Regiment, 101st Airborne Division, when his vehicle drove over an improvised explosive device (IED). CPL McMinn sustained severe damage to both legs in the blast.

Blake was airlifted to Baghdad where doctors amputated his right leg below the knee. When he arrived in the United States, doctors reconstructed his left foot and he was fitted for a prosthetic on his right leg. During the first couple years, Blake struggled in his recovery. His outlook improved once he got involved in wheelchair sports, which helped him realize he can do the activities he loves, just differently.

Now medically retired, Blake enjoys spending time with his wife, Morgan, and their son, Bryson. However, he often feels limited inside his current home. Receiving a specially adapted custom home will enable Blake to regain his independence by giving him the ability to maneuver freely from the comfort of his wheelchair. Without the challenge of stairs inside and outside the home, he will be able to easily carry things. He also looks forward to an accessible bathroom he will no longer need to crawl into. Most importantly, the home is a foundation where his son will grow and see his dad thrive in a safer, more stable environment. The financial freedom of a donated home will enable the McMinn family to save money to pursue their dream of traveling and owning a food truck business. Blake is currently working part time building custom wheelchairs as a way to give back. He also plays wheelchair basketball and is a baseball coach for Bryson’s team.

Originally from Texas, Blake is choosing to remain in the state and is looking to build in the Tarrant County area for the good school district.

Blake would like to thank all HFOT donors and supporters for giving him and his family a reset button in life. “This is not only life-changing for me, but also my family. Without you and your support, we would not have this amazing opportunity.” 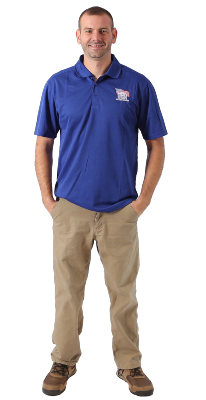