On Dec.10, 2010, Marine Cpl Justin McLoud, serving with the 3/5 Darkhorse Marines, was on his third deployment when he lost both legs and his left arm from an improvised explosive device (IED) blast in Sangin, Afghanistan.

Periodically taking enemy fire while on a foot patrol, Cpl McLoud had already moved across a bridge when his teammate began to cross and stepped on a pressure plate IED. The blast caused traumatic amputations of both of Cpl McLoud’s legs above the knees and required the amputation of his left arm due to the extent of his injuries.

Airlifted to Camp Leatherneck, crews stabilized Cpl McLoud for his flight to Landstuhl, Germany. Waking four days later in Bethesda Naval Medical Center he would spend five weeks there before being transferred to Balboa Hospital in San Diego, where he endured more than 50 surgeries.

Justin enjoyed spending time with his son Desmond, history, outdoor activities, fishing, and snowboarding. He also served HFOT as a member of the Veteran Action and Advisory Team (VAAT).

Justin was grateful to HFOT’s donors and supporters for providing him with a home adapted to his needs. “One of the first concerns I had after my injury was trying to find a place to live that was adapted for me but also a nice home for my young son…HFOT has lifted that burden. Thank you for your support, it means a lot to my family and me.”

Homes For Our Troops extends our deepest sympathies to the family and friends of Marine Corporal Justin McLoud, who passed away on April 16, 2020. Justin was a valued member of the HFOT Family and we will miss him greatly. 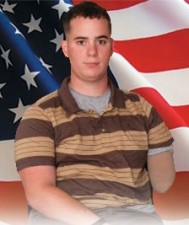