Even though he no longer serves in the military, Army Sergeant (Retired) James “JP” McGuire Jr. has not stopped contributing to his country and community. He formerly worked for the government as a product specialist for the Defense Supply Center, and often speaks to high schools about his experiences.

On Dec. 13, 2007, SGT McGuire was a combat engineer on foot patrol with the 3rd Battalion, 7th Infantry Regiment, 3rdInfantry Division, when he stepped on an improvised explosive device (IED) in Tunnis, Iraq. The blast resulted in the loss of his right leg.

After enduring over 30 surgeries following his injury, JP put his efforts and focus toward his goals.

Thanks to the support of HFOT’s donors, corporate partners, and the Mechanicsville, Va., community, JP received his specially adapted home in August 2017. JP says the home has been a gift from God. “If it wasn’t for this organization who knows where I would be,” JP says.

The sense of security that comes with living in a mortgage-free and fully accessible home permits JP to focus his energy on his family and other activities, such as taking his children, Aubrie and James the 3rd, fishing. He is a life member of the VFW and is a co-head varsity wrestling coach at Mechanicsville High School.

JP says he will not take this gift for granted and will use the tools he learns to help the organization in assisting other Veterans. “The HFOT organization, donors, supporters, and volunteers are the real heroes. From the bottom of my heart, thank you for all that you do, not just for me but also for all of my comrades.” 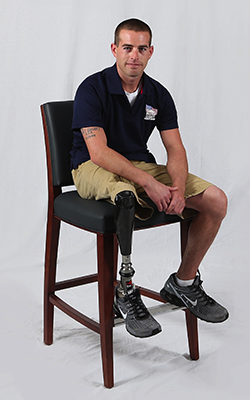