On April 24, 2007, Marine Lance Corporal Robert “Bobby” McCardle, an Infantryman, was on his second deployment serving with the 1st Battalion, 4th Marines, in Al-Qaim, Iraq, when his vehicle was hit by an improvised explosive device (IED). The blast resulted in the loss of his right leg, internal injuries, and a traumatic brain injury (TBI).

Once back in the United States, Bobby underwent more than 40 surgeries at Balboa Medical Center in San Diego. His wife Stephanie remained at his side the entire time. Bobby says it is her strength that guided him through his recovery.

Now medically retired, Bobby and Stephanie have two children, a daughter Taylor and son Chase. Bobby tries not to let his injuries prevent him from being the best dad he can be, although it was difficult because challenges he experienced within his home. Showering posed a safety risk since he had to balance on one leg. Receiving a specially adapted custom Homes For Our Troops home with a roll-in shower mitigated this issue. Regaining his freedom and independence in an HFOT home empowered Bobby to plan a career and do more volunteer work. He currently coaches his daughter’s softball team and teaches church classes on Sunday. “I will be finding many more opportunities to serve my community,” he says.

Originally from Wisconsin, Bobby chose to remain in the state and build his home there.

Bobby says organizations like Homes For Our Troops make him proud to have served this country. “Veterans were asked to take care of this nation and in return for their sacrifice, the American people are taking care of those Veterans,” he says. “Homes For Our Troops grants us the ability to dream again.” 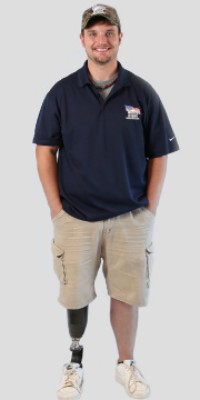