On March 14, 2008, Army Sergeant David Mayer was on his second deployment when he lost both of his legs after the convoy he was riding in was attacked in Al-Hillah, Iraq. En route to a mission in Baghdad, Iraq, SGT Mayer’s vehicle was struck by an Explosively Formed Penetrator, causing him to be thrown into the gunner’s cage. Airlifted to Landstuhl, Germany, SGT Mayer was later transported to Walter Reed Army Medical Center.

David would like to return to school and has hopes to open his own business in the future. He is a member of the VFW, American Legion, the American Legion Riders, and the Patriot Guard.

David is grateful to the support he received from donors and supporters for the building of his specially adapted custom Homes For Our Troops home in Corona, California. “Thank you for doing this… it changes lives and it helps injured service members cope when they see that there are people who care,” he says. 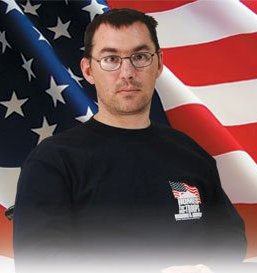