Two improvised explosive device (IED) blasts during Army MSG Eric Marts’ 2006 deployment serving with the 2-136 Combined Arms Battalion, 34th Infantry Division in Fallujah, Iraq took his vision. Shortly after the first blast, he started losing vision in one of his eyes. He continued to serve, but after being in another blast, the condition worsened. The traumatic brain injury (TBI) caused swelling in his optic nerves, resulting in him going blind in both eyes. He has also undergone surgeries for neck and shoulder injuries and experiences balance issues.

Eric and his wife Bobbie previously lived in a trailer park in Moorhead, MN. The home presented many challenges for Eric. The hallways were narrow, which made it difficult for his Seeing Eye Dog Deacon to do his job, and the bedrooms had barely enough space for Eric’s equipment. He and Bobbie love cooking together but their previous kitchen was not big enough for the two of them to be in at the same time. Bobbie was also afraid to leave Eric alone in case of strangers approaching the home.

Eric and Bobbie are happy to be living in a specially adapted custom Homes For Our Troops home where Eric has enough room for Deacon to guide Eric around and a security system is in place, making it safe for Eric to be home alone. Most importantly, they now have enough room to host their five grown children and grandchildren over for holidays and cookouts. “I am truly thankful to be able to have family over and a place to do it,” Eric says.

Eric’s other plans include continuing with his radio show called Heroes of the Heartland, and working with other Veterans. He is currently a member of HFOT’s Veteran Action and Advisory Team (VAAT).

During Eric’s recovery in reintegration training, a Vietnam Veteran visited his group with an injured bald eagle. The bird had a broken wing and head injury after being hit by a car. Eric says he strained as hard as he could to see the bird, to whom he could relate deeply – once so strong and powerful it could soar across the country, now no longer could. Unable to catch a glimpse of the eagle, he became emotional. As he stood to get his picture taken, the bird popped his head up, looked at Eric and stretched out its healthy wing, wrapping it around Eric’s shoulder. “This is how I feel about American people and organizations like Homes For Our Troops, they are taking me under their wing.” 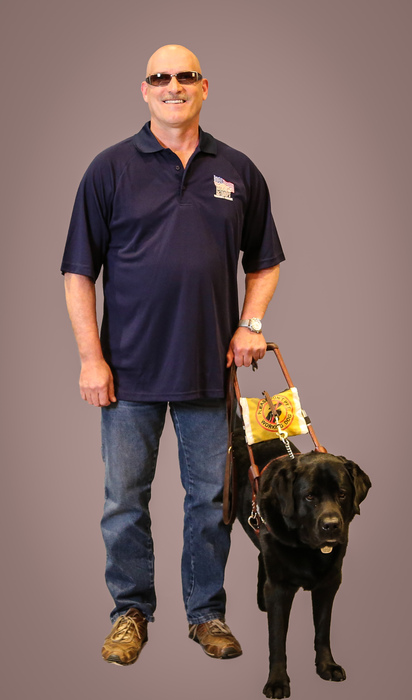