First Lieutenant Marcus Rice joined the military shortly after graduating from high school in 2001, wanting to better himself. He started his military career in the Army Reserve as a Human Resource Specialist. While in college, he was mobilized twice, deploying to Iraq and Kuwait. This delayed his college graduation until 2010, at which time he was commissioned as an active duty Signal Corps officer from the ROTC program at Union College in Kentucky.  He attended and passed the Air Assault School at Fort Campbell, and then joined his unit.

1LT Rice’s plans of making a lifetime career in the Army ended during his third deployment to Afghanistan with the 580th Signal Company, 25th Signal Battalion. On Dec. 5, 2011, 1LT Rice, who was 29 at the time, collapsed after a four-mile run during company PT. After his fellow Soldiers found him without a pulse and shaking, first responders resuscitated him several times. Doctors later diagnosed him with sudden cardiac arrest complicated by anoxic brain Injury. The brain injury caused paralysis from the waist down and weakness in his arms. He also experiences memory loss, seizures, and difficulties in speech from his injury.

Marcus received treatment at the James B. Haley VA in Tampa for a year before returning home to Batesville, Miss., where he currently lives with his parents, Silvester and Willie. In his free time, Marcus enjoys working out, watching sports, and going to the movies. He has taken up handcycling and has participated in several races.

In a fully accessible Homes For Our Troops home, Marcus says he has regained his independence. The lowered countertops and pull down shelves enable him to reach for a drink or snack on his own. Silvester and Willie are happy their son has more freedom, and they are able to spend more quality time with him in an open living space.

Marcus and his family chose to remain in Mississippi to be close to family. Marcus is grateful to all of HFOT’s donors and supporters who contributed to the building of his specially adapted custom home. “Thank you and God bless you all,” he says. 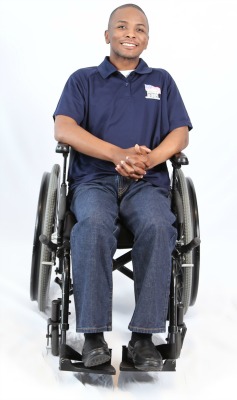