Rebecca Mann joined the military to discover herself and serve a greater purpose. She enlisted in the Army as a radio tech, eventually getting her commission as a Warrant Officer as a server technician before switching to cybersecurity. She deployed on her first tour to Afghanistan in 2008, and again in 2013.

In March 2014, during her second deployment, Chief Warrant Officer 2 Mann was serving with the 1st Combat Aviation Brigade, 1st Infantry Division when she sustained an injury to her right foot. After months of pain, she sought medical attention and eventually underwent foot reconstruction surgery, followed by two more operations; both of which were not successful. After two years, Rebecca was medically retired from the military in 2016, after 11 years of service.

In October 2017, Rebecca was in constant pain and elected to have doctors amputate her right foot, and she was briefly able to resume an active lifestyle while wearing a prosthetic. A year after the amputation, she started experiencing pain in the left leg. Eventually, she learned she had a microvascular condition that was causing the pain and blood flow issues in her residual limb and left leg. After several unsuccessful attempts to correct the problem, Rebecca elected to have doctors amputate her left foot in 2020.

Over the past few years, Rebecca has not let her injuries slow her down. She is the Vice President of the service dog organization Mission Working Dogs. To stay active, Rebecca plays sled hockey for the Boston Shamrocks, and mountain bikes with Spaulding Adaptive Sports Center. She loves sports, her three dogs (including her service dog Sully), and going for hikes in the woods. Since adaptive sports have helped her significantly during recovery, Rebecca would like to do outreach for the programs that were beneficial in her recovery. “Adaptive sports saved me in the worst of times, and I want to help other Veterans and youth to have access to sports as I have,” she says.

Receiving a donated, specially adapted custom Homes For Our Troops home will empower Rebecca to achieve her goals. Rebecca spends most of her time on the main level in her current home, since using the stairs is challenging while on her prosthetics. Her backyard is sloped and uneven, making it hard for her to maintain her balance when she takes her dogs out. She often becomes discouraged when she cannot use her wheelchair throughout her home because the hallways are too narrow. “The adapted home would be life-changing for me. I have continued to need surgeries, and any time I have to be in my chair, life at home is difficult.”

Originally from New York, Rebecca is choosing to build her home in Mattapoisett, Massachusetts. Growing up, she always loved New England and vacationed there often, and her brother and mother live in the state now.

As a proud and independent person, Rebecca says asking for assistance is hard, but she realizes the key to her continued independence is accepting help. “Receiving an adapted home from HFOT will enable me to live safely in my home and be independent even when I have to use my wheelchair,” she says. “I hope someday I can change someone else’s life like HFOT does for their Veterans.” 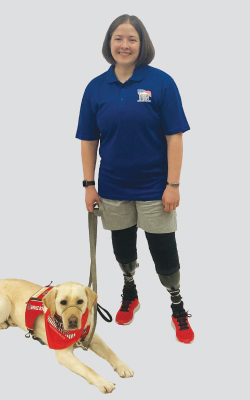