Marine Lance Corporal Benjamin Maenza was three weeks into his first deployment when he lost both of his legs and sustained injuries to his arm as the result of a bomb blast in Sangin, Afghanistan on Oct. 21, 2010.

While on foot patrol, LCpl Maenza and his team crossed a river and began making their way along the other side when an improvised explosive device (IED) was triggered. LCpl Maenza immediately lost both legs in the blast, requiring lifesaving measures to prepare him for helicopter transport to the nearest hospital. Airlifted to Camp Bastion, LCpl Maenza was next sent to Landstuhl, Germany before arriving to the United States at Bethesda National Naval Medical Center in Maryland.

Now medically retired, Ben and his wife Kohl now have two sons, Hank and Jack. Ben enjoys working out, cycling, swimming, and playing wheelchair basketball and volleyball. He plays sled hockey for the Nashville Sled Predators. Pursuing a college degree, Ben looks forward to a future of possibilities where he says, “I want everyone to see me for who I am, not for what I am missing.” 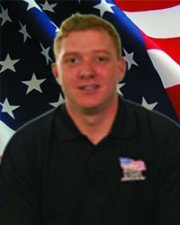