On Nov. 12, 2011, Marine Lance Corporal Hector LunaRodriguez, an Infantry mortarman, was on patrol with Weapons Company, 3rd Battalion, 7th Marines, in Sangin, Afghanistan, when he stepped on an improvised explosive device (IED). The blast resulted in the loss of his right leg and severe damage to his left leg.

During his air evacuation to Bagram, LCpl LunaRodriguez required resuscitation several times. Once stabilized, he was transferred to Landstuhl, Germany, and eventually to the United States where he was treated at Walter Reed and Brooke Army Medical Centers. After four months of rehabilitation, with the aid of his new prosthetic, he was able to stand next to his wife, Karen, for the birth of their daughter, Rhianna, in March 2012.

Now medically retired, Hector works 50 hours a week for a company in the oil fields to provide for Karen and his children. The long commute and workweek often take a toll on Hector’s health. Having a fully-accessible, donated home from Homes For Our Troops enables Hector to rest properly and not overwork himself. He hopes to one day be able to contribute to organizations that have helped him and his family through hard times, and living mortgage free provides the foundation for him to do so. Now that he is living in the home, he will also be able to focus more time on his hobbies including, shooting, camping, and hiking. In April 2019, Hector and Karen welcomed their second daughter, Mia. In December 2019, he earned his skydiving wings.

Originally from San Antonio, Texas, Hector chose to build his home just outside the city in Boerne, to be close to family and for the community’s excellent school district and proximity to the VA Hospital.

Hector says he does not expect handouts, adding that he is grateful to the donors and supporters who made his specially adapted home a reality. “Thank you for helping my family receive a forever home that my child and future children will grow up in,” he says. 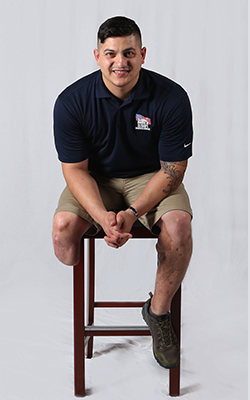