Feeling that traditional schooling would not lead him to a career he would love, Brian Lowen earned his GED and enlisted in the National Guard.

On June 15, 2005, during his first deployment in Balad, Iraq, Army Sergeant First Class Lowen was injured during a mortar attack. Despite injuries to his wrist, leg, ribs, and sustaining a traumatic brain injury (TBI), SFC Lowen continued to actively serve.

In between surgeries on his wrist and leg, Brian deployed an additional six times to Iraq and Afghanistan. Brian considers it a battle won that he left each deployment on his own two feet. After 20 years of service, Brian decided to have his right leg above the knee amputated.

Now medically retired, Brian’s current home is not suited to his needs. Although he lives an active lifestyle, when he returns to his two-story home at the end of the day, he is limited to one room if he wants to use his wheelchair. Due to the pain of wearing a prosthetic for most of the day, he is not able to perform daily tasks throughout the home.

Brian says a specially adapted custom home will be life-changing and a whole new beginning for himself and his children. Friends with HFOT home recipients, Brian has seen firsthand the difference an adapted home makes. He looks forward to accessing the entire home from the comfort of his wheelchair. A safe place to live will enable Brian to regain his independence and spend more quality time with his family. A barrier-free home will also give Brian more time to pay it forward by helping other Veterans and introducing them to organizations that have helped him through his journey.

Originally from California, Brian is choosing to build his HFOT home in Colorado to be close to family.

Brian is thankful to HFOT donors and supporters for stepping up and supporting our nation’s Veterans. “For your generosity, kindness, and willingness to go the extra mile I say thank you from the bottom of my heart.” 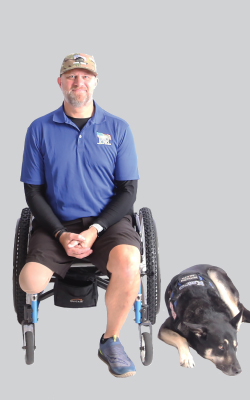