Marine Lance Corporal Brandon Long was on his first deployment when he lost both of his legs in an improvised explosive device (IED) blast in Sangin, Afghanistan on Dec. 21, 2010.

Two days before the birth of his daughter, LCpl Long was walking through an area comprised of river rocks, while on a foot patrol with the 3rd Battalion, 5th Marines, when he stepped on an IED resulting in multiple traumatic injuries. Heroic measures took place over the next hour as his squad fought to save his life while waiting for a helicopter to arrive for MEDEVAC.

Due to the tremendous amount of blood loss, LCpl Long required resuscitation multiple times during the ordeal; losing 98 percent of his blood volume by the time he arrived at a local field hospital.

LCpl Long was next airlifted to Landstuhl, Germany before arriving at Bethesda Naval Medical Center where he remained for two years, enduring surgeries and rehabilitation before returning home to Indiana.

Brandon credits his daughter Claire with getting him through his ordeal and on the road to recovery. She became his reason to push harder and be an involved parent. A musician who enjoys both playing and reading music, Brandon appeared on stage at the Woodruff Foundation’s, Stand Up for Heroes event in New York City in November 2012. An avid outdoorsman, Brandon also enjoys shooting, hunting, and fishing. He recently started a new job in sales at his local Harley Davidson dealership.

Brandon is grateful to Homes For Our Troops’ supporters and donors. “Having this specially adapted home makes my life so much easier. I am, and always will be, thankful for everything you do and have done for me and my family. Thank you.” 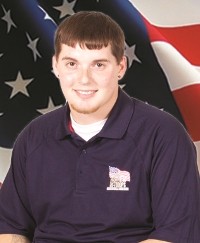