On April 7, 2003, during his second deployment, Sergeant First Class Livesay was shot in the left knee while serving with the 5th Special Forces Group. His injury was sustained during a prolonged and intense firefight to recover 3rd Infantry Division Soldiers pinned down during the push into Baghdad. He underwent several surgeries to save his leg in Iraq and during his transport to the United States. Immediately upon his arrival to Walter Reed Medical Center, doctors performed an emergency amputation to his left leg to save his life from a bacterial infection in his wound that caused septic shock.

Christopher’s injury did not diminish his patriotic spirit nor his determination to serve his country. He spent months doing rigorous physical therapy on his own to get back in shape. Two months after receiving his first prosthetic, he returned to active Airborne status jumping from planes and shortly thereafter became the first amputee to graduate from the Army’s Pathfinder school. He was also named the 2005 U.S. Army Special Operations Command Special Forces Medic of the Year. In 2010, he was assigned to the Army’s World Class Athlete Program (WCAP) in the sport of rowing. He was later assigned to the Warrior Transition Unit in Fort Sill, Okla., before retiring in 2014.

After his injury, Christopher met and married the love of his life, Catherine, and they now have two young children. Christopher loves cooking for his family but the task was challenging in his previous home because the kitchen was not wheelchair accessible. Christopher was forced to stand on his prosthetic when preparing food, which was often painful for him. Additionally, Christopher experienced safety risks daily in his home, especially in the bathroom where he had hurt himself trying to hop on one leg into the shower. Christopher had become increasingly discouraged coping with these challenges for the past 16 years. He was relieved when Homes For Our Troops built him a specially adapted custom home, where he is able to rest his legs and recover. “I now spend less time worrying about life and more time enjoying my family and doing things I love such as hunting, fishing, and volunteering,” he says.

Christopher is excited about the financial freedom of the home. He hopes Catherine will now be able to finish her degree, which she put off to focus on raising their family. Christopher would also like to return to school and learn new skills to support his family. The home also affords Christopher and Catherine the ideal environment to live their goal of homeschooling their children.

Originally from Texas, Christopher chose to remain in the state and build his home there.

Christopher considers HFOT and its donors and supporters to be a blessing. “What you give is not just a home but the hope and freedom necessary for us to move forward with our new lives. Thank you so much from the bottom of our hearts.” 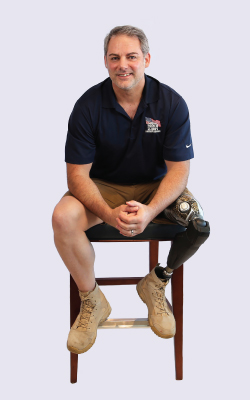