Growing up with a father in the military, Daniel Lister learned early on about the skills a Soldier needs to excel. When he found himself going down the wrong path, he joined the Army for the discipline and comradery.

On June 2, 2010, Staff Sergeant Lister was serving as a combat engineer with the 57th Sapper Company, 27th Engineer Battalion, 20th Engineer Brigade in Wardak Province in Afghanistan. While checking for explosives during a dismounted route clearance patrol, SSG Lister stepped on an improvised explosive device (IED). He lost his left leg below the knee, and sustained severe damage to his right leg and left arm. He recovered in a stateside hospital for over a year before returning home to continue his recovery.

Now medically retired, Dan enjoys spending time with his two children, Gabrielle and Camden. He feels his family’s daily routine revolves around his injury and limitations. In his current home, there are two flights of stairs and the doorways are too small for his wheelchair. It is especially frustrating for Dan that he cannot access his children’s rooms. “Being a prisoner is not supposed to be the way of life.”

Receiving a specially adapted custom home will grant Dan newfound freedom and independence. A barrier-free environment with an open layout will give him the ability to assist with tasks around their home, and to be with family no matter what room they are in. The financial freedom of a donated home will enable Dan to save money for future endeavors including his children’s education. Without a series of obstacles in his home, he hopes to go back to school to finish his degree in history education. Dan’s ultimate goal is to grow old and enjoy life.

Dan is choosing to build in Georgia for proximity to family, friends, and the beautiful scenery.

Dan would like to thank HFOT donors and supporters for giving himself and his family a new lease on life. “You show Veterans that life is not over, they are not trapped. You make a difference.” 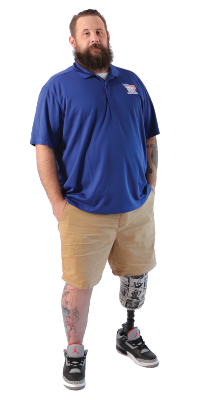