Originally from the Philippines, Nathaniel “Randell” Leoncio joined the Navy to serve as a corpsman with the Marines with aspirations to become a firefighter paramedic.

On Oct. 4, 2005, Doc Leoncio was on his first deployment, serving with 3rd Battalion, 7th Marines, when his vehicle drove over an improvised explosive device (IED) in Ramadi, Iraq. The explosion flipped the vehicle over, pinning HM3 Leoncio underneath. Fellow HFOT Veteran Corporal Neil Frustaglio, who was riding in the vehicle behind Randell’s, was the first to rush over to help. Cpl Frustaglio rocked the vehicle back and forth so HM3 Leonico could crawl out. Randell lost his leg right leg, but before he was evacuated, he directed the other Marines on how to treat himself and others who were injured. HFOT Veteran Cpl Travis Greene was also serving with HM3 Leoncio at the time of his injury.

Medically retired, Randell is now a prosthetist at Balboa Naval Hospital, where he treats many fellow HFOT Veterans. He would like to take his education further and get his Ph.D. in a related field, and get involved more with policy. “I love what I do, helping people like me walk and be active again,” he says.

Receiving a specially adapted custom home from Homes For Our Troops home will enable Randell to progress more easily in his career without the challenges of living in a non-adapted home. In his current residence, Randell often has to hop into the shower because it is too small for his wheelchair, and he has trouble reaching the cabinets in the kitchen. Though he currently manages these obstacles and is mobile within his home, Randell knows it will get more difficult as he ages and risks injuring himself further. “If I ever injured my left leg, I would struggle a lot to even get into our home,” he says.

In his free time, Randell enjoys spending time with his wife, Abreail, a Navy Nurse, and his stepsons. His main hobby is off-roading with his jeep, and he also likes camping, snowboarding, and working on cars.

When Randell moved to the United States at the age of nine, he settled in Southern California. He is choosing to remain in the state and build his HFOT home there to be close to family, healthcare, and his job.

Randell has seen the difference an HFOT home has made in the lives of his patients, enabling them to return to school, pursue careers, and start families. He is grateful to HFOT supporters for providing his fellow injured Veterans with this gift. “I want you all to know that you are making a difference and improving injured Veterans’ lives.” 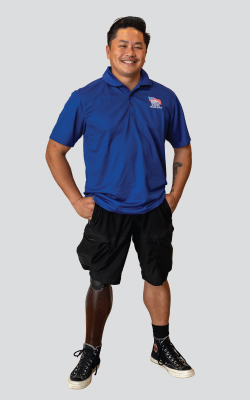